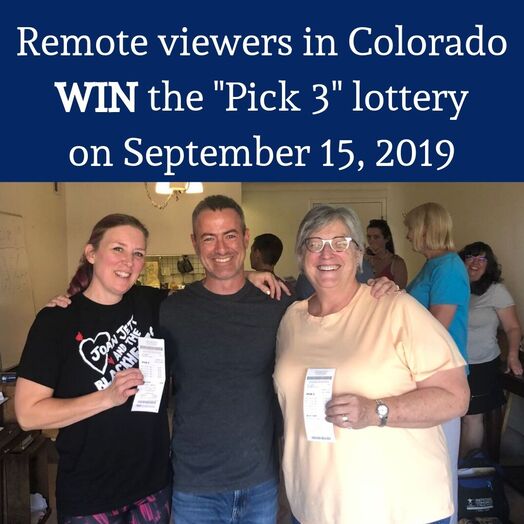 Click on the video at the bottom after reading.
The first thing we should say is, it's not about the money. But it's a nice - and important - incentive. Anyone familiar with ESP research and other psychic studies understands how much boredom and a lack of curiosity can quickly dry up a person's psychic ability after just a few boring tests. But the Pick 3 lottery is a perfect laboratory for systematically testing various concepts regarding psychic ability, by using the protocol known as "remote viewing." It keeps people interested.

Can people accurately perceive, describe, and even draw an image or event that they will be shown several hours, days or weeks in the future? This would indicate "precognition." Can they use this ability to determine the future outcome of a real event? In the case of a lotto drawing, for example, can a remote viewer determine whether the number 3 ball will be drawn? That's what each viewer did in this experiment, led by Sean McNamara from http://www.MindPossible.com, who personally trained most of these viewers and shared in other consciousness related experiences with them, such as psychokinesis, group-intention-healing experiments, and meditation.

Did you know? Sean is leading an very special, experimental Remote Viewing 5-day intensive in beautiful Estes Park in later April 2020. Click here to learn more about it.

Sean sees meditation as the cultivation of peace and inner-understanding. It's also a great way to clean the "mirror of the mind" to prepare it to perceive non-physical information. Remote viewing is then like taking the next step, or adding a bit of the "energetic" aspect of life to the meditative space. He feels that energy is information, and that it moves across space and time. This, of course, is not a novel idea. When we study chi kung, reiki, prayer healing, or any of the many other human modalities across the planet, we see that this concept is universal. Everything is interconnected.

In this case, the team had to determine not only which numbers would be drawn, but which numbers would not. It would be a team effort. In a sense, this was a test of "Can a whole team of remote viewers get each of their individual sessions correct (or correct enough) to be able to buy a winning ticket?"

After several attempts over the last year, this team of friends finally succeeded.

Well-trained remote viewers already know that it can be used to determine the outcomes of sporting events, political elections, the location of missing people, and how the DOW, S&P 500, or other financial instruments will perform in the coming days or weeks. Obviously, there are potent and practical applications being put to the test by savvy viewers.

So why publicly share the fact that this small group of remote viewers in Colorado tackled the Pick 3 lottery and won? The prize amount isn't even that significant. The reason for sharing this information is because remote viewing is still largely unknown in this culture, and this is an opportunity to get more people interested in the idea that the human mind is capable of far more than people tend to give it credit for. Transcending time and space just takes a little bit of training and confidence, along with an open mind. This is one opportunity to see where science and spirituality intersect in objective fashion. If you'd like to learn how to do remote viewing, check out Sean McNamara's online course in the Remote Viewing section of MindPossible.com. In it, you'll learn exactly what steps his group went through to finally WIN the lottery, step by step. Then you can do it too!

The video down below also suggests other wonderful groups you can go to get trained as a remote viewer.

Or check out Sean's live class schedule to see if you can attend in person.

To learn about the history and mystery of remote viewing, particularly how the U.S. government trained soldiers to use it for spying during the Cold War, Sean recommends you watch the documentary movie "Third Eye Spies," available on Amazon Prime and through other video providers.

Update 2022: Check out the 4-episode program "Connected: The Remote Viewers" on YouTube, which Sean created with a team of 5 remote viewers working targets over 6 weeks.