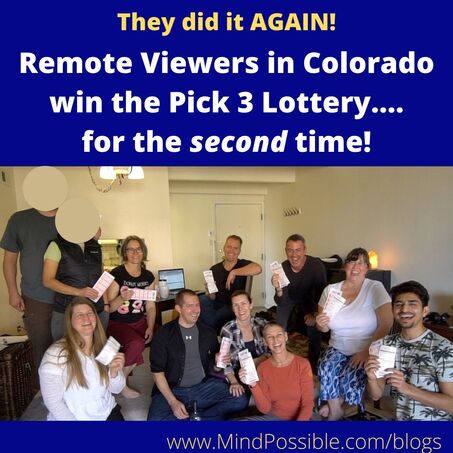 Some people may have thought it was a fluke the first time Sean McNamara and his remote viewing friends won the Pick 3 lottery back in September. Could they do it again! On Sunday, November 10 2019, Sean's friends gathered inside his living room for a full day of psychic exploration exercises. Not only did they practice their skills at remote viewing (clairvoyance using a special protocol), but they practiced several styles of DMILS, or Distant Mental Influence On Living Systems, a type of psychokinesis, to see if they could affect each other's bodies and minds from different rooms in his home.

Some of them had already learned how to move an object across a distance without any physical contact (telekinesis), and several had already experienced the ability to soften and bend metal (spoon bending) through the use of energy-information and visualization. And they decided to tackle the Pick 3 lottery one more time.

Using a special team-protocol in combination with remote viewing, they were able to retrieve information from the future, an ability called precognition, which would help them determine which numbers would be drawn, as well as not drawn. "It's not just about picking the correct three numbers," Sean remarked. "We have to be correct about every possible outcome. Will the number 3 be drawn or won't it? What about the other nine potential numbers?"

That morning, the team determined four possible winning numbers, which posed a small challenge. "When we were finalizing our prediction for the mid-day drawing, we felt strongly that numbers 1, 2, and 8 would be drawn. But there was a question about number 5, and we couldn't ignore it."

"Not everybody bought all the possible combinations, but I know where were a few more winners in the group. I just wish I had bet $5 instead of $1 to win a bigger jackpot!" Sean said with a chuckle. "Someday I'd like to try for the real big Colorado lottery, but I need a team of 42 solid remote viewers before we can give it a go."

Sean reminds us that "it's not about the money." He periodically receives criticism about using psychic abilities for monetary gain.

​"Listen, we use the lottery because it's the perfect third-party testing device. It's objective, we can't fudge the experiment with it. It offers 3 sets of potential outcomes, each out of ten possible numbers. It's a great experimental design to test whether we truly are interconnected with each other and with our world in a deep way, across space and time. For me, this is spiritual practice with an element which is usually missing - evidence."

He continues, "Besides, every single person on the planet who has a job is using his or her mind in order to make money. Making money through psychic means is no different, it's just using one's mind. This isn't a moral issue. It's what you do with the money that makes the difference."

Want to learn remote viewing? Or learn the specific method they used to win the Pick 3? Check out his online video course, his live classes, or his latest book "Signal and Noise: Advanced Psychic Training for Remote Viewing, Clairvoyance, and ESP." 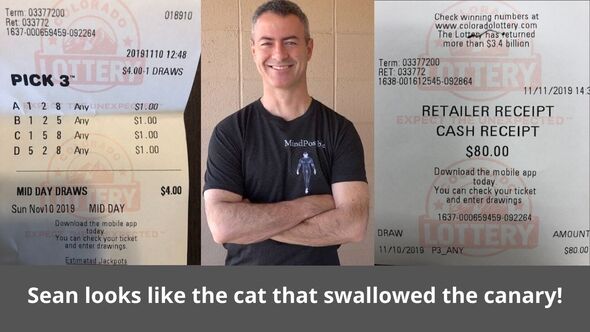